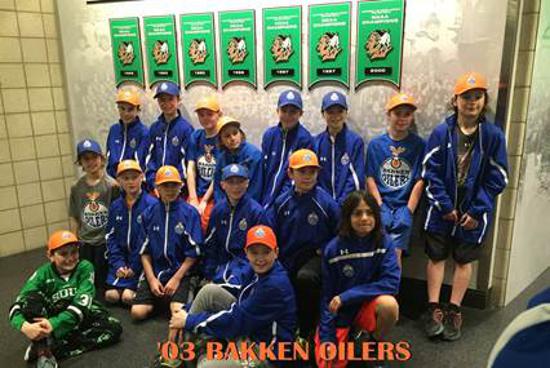 The 2003 Bakken Oilers Orange are coached by former North Dakota Fighting Sioux players Jay and Jeff Panzer.  Players are from Western North Dakota, Grand Forks, ND, Fargo, ND and Minot, ND. This team was formerly the Dakota Ice Hawks before becoming a team within the Bakken Oilers organization in 2015.

Bakken Oilers 12U skated away as the 2017 12U Summer Finale Champions with two hard fought wins in the championship round.  After going undefeated in pool play, Bakken beat Chicago Mission 3-2 in the semi-finals and moved on to face The winner of Crown Hockey - Gold and Machine Orange.

In the championship game, The Bakken Oilers defeated Machine Orange 1-0 in the first minute of overtime to claim the Summer finale championship.  The MVP award went to Payton Schwantes for her outstanding play all weekend and her game winning goal in the overtime championship game.

Congratulations to the players, coaches and families of the 12U Bakken Oilers!  What a great way to end the summer.  The entire organization is proud of you!

The 2003 Bakken Oilers are champions of the North American Pepsi Cup! Despite the tough competition from all over North Dakota, Minnesota and Canada, the 2003 Bakken Oilers proved that they are an elite team by taking the first of what could be many championships over the coming years. Coached by former Lake Superior State University hockey player Danny Hanson, the team showed both skill and grit in winning the close grind it out games and the wide open fast paced skill games. This team is versatile and skilled enough to compete with the elite teams across the region and expects to continue its success as the 2014 AAA season moves on.